Vienna is a beautiful city with high living standards and a modern mindset. It’s time to not only enjoy its diversity but to actively explore the potential of becoming the next great startup city.

The following story will start off less technical, and instead more historical/personal. Skip to “My first time with GatsbyJS” if you only want to hear about the implementation 😊 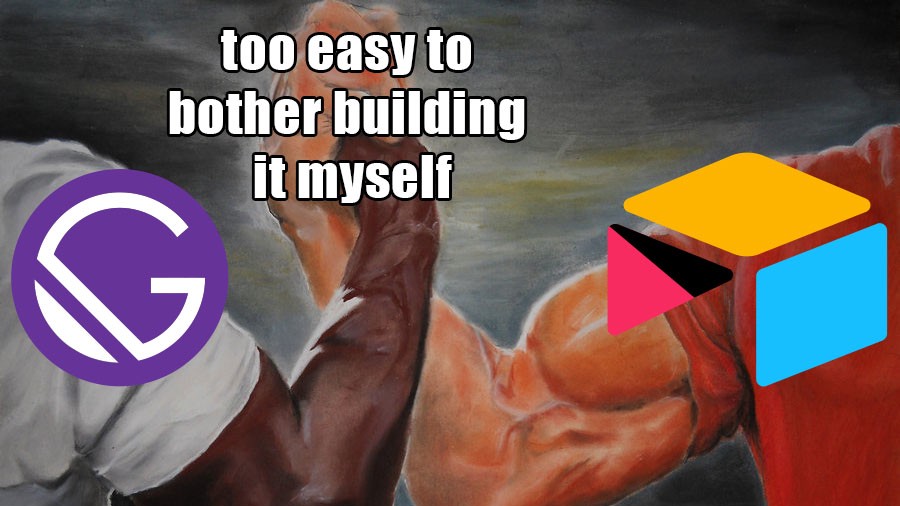 Almost 4 years ago, in 2017, I moved from a small city to Austria’s Capitol, Vienna, to study Software Engineering at Vienna University of Technology (TU Wien). As I have mostly been self-taught in the 4 years before, I finally wanted to learn it by the book. Next to studying I started to manifest my know-how on iOS mobile app development, eventually founding my own mobile app development agency techprimate in 2018.

Another three years passed, and I am still living in Vienna, still studying, still building software as my passion. After some failed projects in 2019 and struggling with university at that time, pivoting my goals became necessary. In 2020 I decided to invest more time into becoming known in the developer community, to have a larger network where I can share my knowledge and learn from others. The first step was doing a summer internship as a back-end developer at fusonic, and afterward starting as a part-time iOS/macOS developer at WolfVision. During that time I was able to meet great new developers, learn how others work, and apply my capabilities.

One day, after listening to a great talk of Max Stoiber “How Open Source changed (his) life”, one major thought kept stuck in my head:

Share with others, what you are currently working on. There is no value in keeping everything to yourself, especially if you never get to release it to the world… build it in public!

This isn’t quite a quote of Max (as I just made these words up in my head while writing this article 😄), but basically what I got from his talk is, that all the side-projects on my computer or in my private git repositories are just decaying, as everything around keeps evolving.

Well… I have already been a part of the Open Source community, when I started TPPF, a Swift PDF Generator framework, in 2016, and even though I am personally not using it anymore, the community using it keeps growing every day. This is enough reason for me to keep maintaining it (as much as possible). Because of its success and me actively relying on Open Source too in many aspects, I became a strong Open Source advocate!

As an (unfortunate) example, I also experienced where being too secretive can lead to: In the past, we built a school app at techprimate. As we feared competition we kept it as secret as possible, which lead to the project failing… because we didn’t have enough feedback, when it became inevitably necessary.

Sharing my content with others & building projects in the public, will help others and lead to feedback eventually!

This is my motivation to write blog posts, like the one you are reading right now! 😄

An awesome monthly online event called “iOS Dev Happy Hour” was launched about 7 months ago on Twitter (by Allen W) and last month I finally got the chance to participate. It showed me once again how diverse and fascinating the international iOS Developer Community is, how important a great network can be, and how interesting the projects of other developers are.

During some research on local events in Vienna afterward, a new idea hit me: A website, where mobile app developers (such as myself) can find other apps, and furthermore their developers, in the same area. This has a lot of potential, as eventually we can use the platform to gather information about other events/projects/etc. which are going on in Vienna, and eventually become an important resource in the Viennese mobile developer & startup community.

The concept is quite simple:

We want to build a community! And luckily we had the perfect domain available: vienna-app.dev

Start small, but with high quality!

The idea was born. And as my co-founder Jules liked the idea too, we did some brainstorming on how to implement it on a UX and technical level.

In the previous years, next to building apps, I also got into back-end development — starting with my very first little Node.js express server hosted on Heroku (I had no idea how else), to learning how to use Docker to isolate projects into containers, to becoming an (early) adopter of the serverless Framework, and eventually up to using AWS services to built highly distributed services.

In the end, the power of understanding many technologies leads to a software developer’s downfall… we over-engineer simple solutions.

As another (personal) example, our domain techprimate.com went through different stages of complexity too:

The story doesn’t end here, as now we have so much going on at techprimate, that manually editing every single HTML website becomes repetitive. We will look into code generators and maybe even a back-end with admin area further down the road — but this time our main focus will stay on the content of the website, rather than the artistic aspect!

As I am a still huge fan of automation (one of the reasons why I am building kiwi) repeating stupid tasks over and over should not be the everyday reality, so I had to find a balance between the static & the dynamic aspect for building the vienna-app.dev community.

My first time with GatsbyJS 😄

While looking into static page generators for techprimate.com a few candidates popped up, such as Jekyll, Hugo, Publish, and more… but in the end, I decided to give GatsbyJS a shot for vienna-app.dev.

The hardest parts of the web, made simple. — gatsbyjs.com

Gatsby builds a React website and uses server-side rendering to generate a website based on static source you (might) have only available at the build time. Sounds good so far.

As mentioned before, the community website should allow developers to submit their apps, therefore some kind of backend service is needed. Luckily Jules is currently researching all kinds of nocode/lowcode solutions for another project and introduced me to Airtable, a service I would describe as an “easy-to-use-database with automation”.

With Airtable it was quite simple to create a table with the necessary fields:

Now, this isn’t such a big requirement, I could have easily built this using a Postgres database too, but for me, the important key feature is the simple form creation. Airtable allows me to offer interested developers to directly submit their apps into my database. Then I utilize automation scripts to create the dataset necessary for generating the static HTML website with GatsbyJS. Additionally due to its simple interface I don’t have to do any coding to get it all working 🎉

… well, to be honest, in the end, it wasn’t an entirely no-code-database, as I had to write a small Automation in JavaScript to merge the original submission with further update requests, but that’s a completely different story to building a fully-blown API server.

Gatsby is based on a plugin structure, where source plugins provide data to the application from different providers (e.g. from a file or an API) and other plugins to add more features or transform data into our HTML/JS/CSS website. 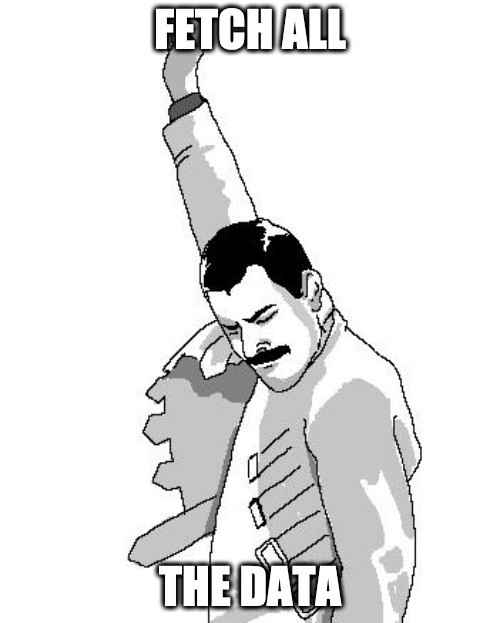 The Airtable source plugin fetches the data at the start of the development server and saves it into a temporary file which can then be queried using the default Gatsby GraphQL data interface.

We purchased a Gatsby template that perfectly fitted our needs: sleek design and perfect for showcasing many apps. Now, whenever the Airtable data changes, I can re-run the build process locally and deploy the updated website 🚀

Now when it came to deploying the static website I had a few options:

I decided to go with the latter one, as I have recently created learned how to use Docker Swarm for automatic deployment updates.

Creating your own docker image is fairly simple, especially when using multi-stage builds (which are also quite new). First, you create your Dockerfile with one stage building the website, and another stage copying the build products into a static server (e.g. NGINX).

I won’t go into detail about multi-stage builds (if you want a full tutorial, let me know on Twitter). The final Dockerfile looks like this one: 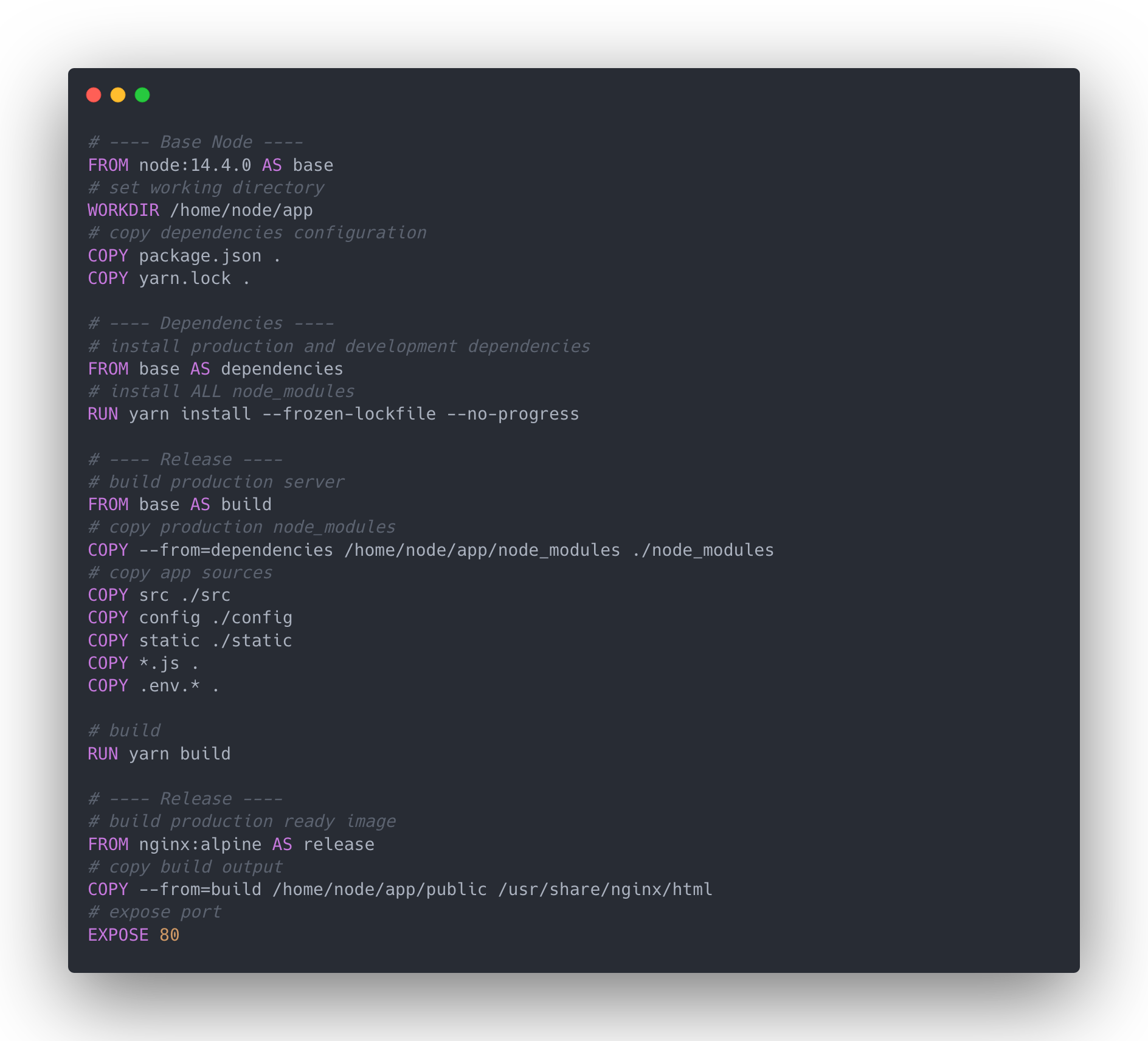 Now I can build, tag and push the application and update my servers using versioning in my Docker Swarm 🥳

If the project gains more traction this process will get more automated or even be extended using a live API at some point, but as mentioned before: Start small!

What’s next to come?

This is version v1.0 of vienna-app.dev, therefore it is quite bare and it will take some time to improve and more developers to submit their apps. Anyways I am very happy with the very quick progress after a single week of development and excited to see where it goes!

Do you have more ideas to improve this project? Let me know!

You are/know someone living or working in Vienna and building mobile apps? Submit your apps! 😃